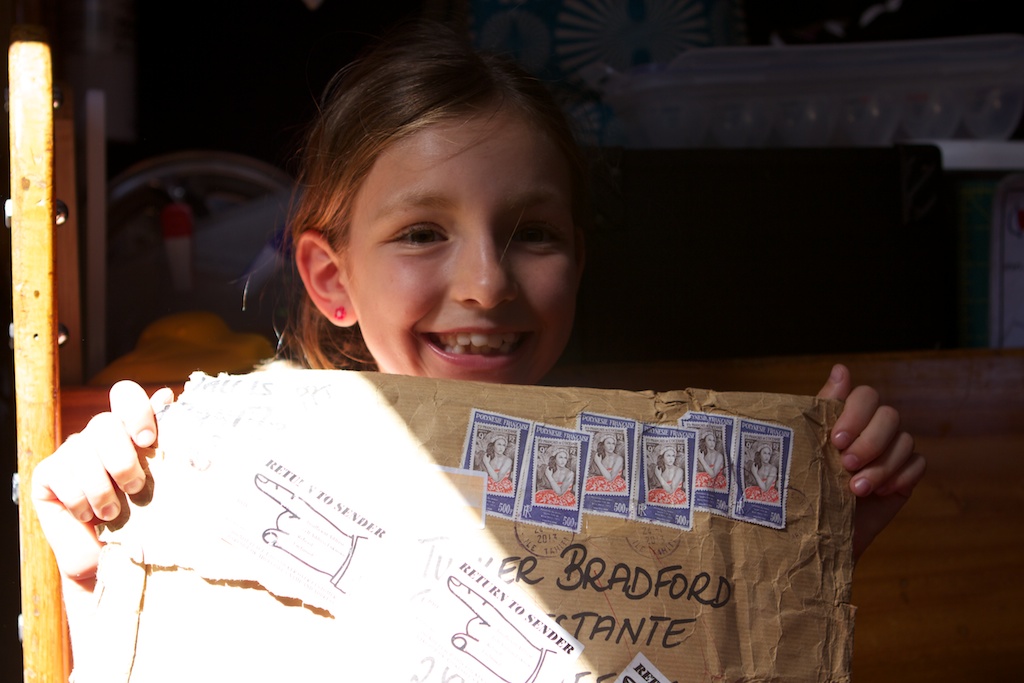 We were all excited to get to Tahiti of course. The excitement was partially because it was Tahiti and partly because it was one of the few places in the South Pacific that we were pretty certain we could receive birthday presents for Tucker and Ruby.  We anchored by Marina Tahina for a bit and picked up our new spinnaker and even a wifi antenna (both shipped from the US). It was exciting to have mail from the States after many months without.

A week later, we moved to the Med moorings right in the heart of Papeete, enjoyed the playgrounds, frozen yogurt, the bookstores (it didn’t matter that we couldn’t read them), and planned Ruby’s eighth birthday party. Both Tucker’s sister and his parents sent packages on the same day, June 5th. We got Kate’s package just in time but the other package remained missing. We checked in with the shipping agent in Papeete every day until the weather and time forced us to shove off toward Moorea. We consoled Ruby by reminding her that, with  just a short ferry ride, we could have come back for the parcel… if only it would arrive.

Two  islands and a month later, we checked out of Bora Bora without it. Every day Ruby asked when she was going to get her birthday present, but once we departed the French Polynesian islands we really didn’t know.

We sailed on and when we were between Bora Bora and Suwarrow we received a email over HAM radio saying that the package arrived in Papeete (it had travelled to New Zealand, no wonder it took six weeks). Since there were no reliable places to send it until Australia, we instructed CGM to hold onto it for us until we got to our final destination.

When we finally arrived  in Oz we asked the agent in Papeete to send the package along to the Post Restante address in Brisbane. We checked in at the post office every few days and got notice that it arrived on 5 February! But alas, each time we went to pick it up it couldn’t be found. Sadly on 4 March it was on its way back to Tahiti with “Return To Sender” stamped all over it. It would have been easy to be miffed about Au Post losing our package, but like so many places in Australia they had excellent customer service, and after filling out a lengthy form, they  sent us a check for $37 so that we could try again.

In the meantime, Tucker  rented workspace which finally afforded us a reliable address! So we called CGM in Papeete and asked them to send it again to Tucker’s New Farm address. Again excitement, and … disappointment.  A month or so later we heard from CGM that the package landed again in Tahiti. Had Ruby’s package been to Tahiti even more times than even Carol and Livia?  We couldn’t figure out what had gone wrong and they wouldn’t re-send without us paying again. Since we weren’t sure that we’d ever get it through the post we put out a call for help from fellow sailors, and it worked!

The family from s/v Mac Pelican was sailing from Tahiti to Brisbane and they offered to collect our package and sail it to us! We were expecting that sometime in November or December they’d arrive and deliver. But sailor’s plans often change as theirs did. They had a family emergency and left the boat in Tonga for the cyclone season (back in Anchorage 11 where we discovered buried treasure a year before). So the family and our package flew from Nieafu to Nukuʻalofa to Nadi, Fiji and then to Brisbane.

Ruby’s package from Boston to Papeete

We tried to receive it at Post Restante when we first arrived in Australia.

When Tucker got a work address we tried again.

It took many stamps to get to us.

Finally we gave up on post and asked any sailboat coming through Tahiti to help.

Ruby’s really excited to peel back the layers.

Ruby tried on her togs and they fit!

We got a call one morning in the beginning of October. They were in our neighborhood! They had the package! We grabbed the camera and hopped into the dinghy to meet them right that second! We had a quick and lovely visit with Bernadette, Paul, and Finnley, and learned that Paul and Bernadette had even lived here at the pile moorings a decade ago.

We had heard that there might be some clothes for Ruby in the package. In fact there was a swimsuit and a beautiful skirt among the treats and best of all they still fit!

We are very thankful for Bernadette, Paul, and Finnley for taking care of getting Ru’s present to her after sixteen months in transit. We’ll be sure to save a spot at the pile moorings for them next year when they sail in to stay for a while!

This epic story started out with tears and frustration, but like so many of the trials that come from a life of adventure, the discomfort transformed into a story, and with the telling of the tale a new light was cast on it.  Ruby now tells it with a smile, knowing that it’s another unusual experience that most other kids never have.